We all know the cane toad is an invasive, toxic pest that displaces and predates on small native frogs and poisons any animal that attempts to eat it. There is already an enormous amount of information on the internet about these animals so this website does not aim to reproduce this information, but will provide links for general information.

Please report your Cane Toad sightings to ToadScan this link will take you there.

Friday night cane toading has recommenced with 360 toads collected at Woombah. Check the CVCIA or Clarence Landcare’s Facebook pages for the next planned event.

The NPWS website has a brief, but good introduction on how to identify a cane toad. The best part is the link to listen to a cane toad call – please practice your listening skills as this helps us to track the spread of toads in the valley.

The following is an excerpt on how to identify a cane toad, taken from the CVCIA Volunteer Training Manual . Thank you to NPWS,  the STTF and KTB organisations for permission to use these images. The full training manual can be downloaded in the Resources section of this website. This provides many images from spawn and tadpoles right through the adult toads.

If in doubt, please contact NPWS Grafton to confirm identification on 6641 1500 or email toads@cvcia.com.au .

Here are some cane toad photos the male is typically a smaller, yellow, more even toad, while the female is larger, darker and with patterns on her back. 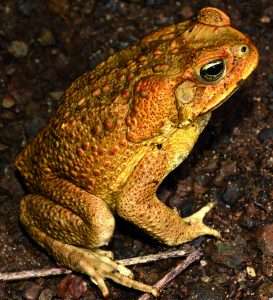 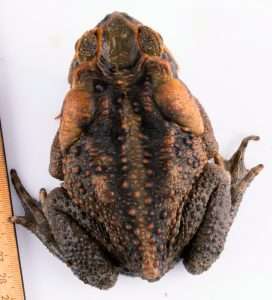 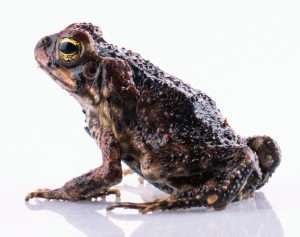 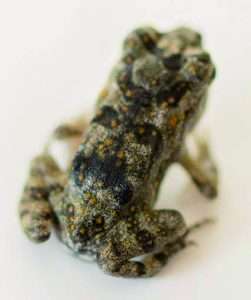 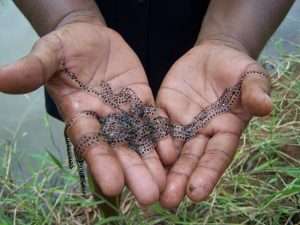 Status of the cane toad

The movement of the invading cane toad front has increased in pace over time, with the front now moving at an average rate of approximately 50 kilometres a year. The first cane toads crossed the border of the Northern Territory (NT) and Western Australia (WA) in February 2009.

The community response to the threat posed by cane toads in WA was unprecedented, with well-organised and committed community groups such as Kimberley Toad Busters and Stop the Toad Foundation working since 2005 to try to prevent the entry of toads into the State. The State Government has invested more than $7.8 million in the fight against cane toads in cooperation with a range of stakeholders, including community groups, universities, the Australian Government, local shires, Indigenous groups and others. This has included a range of programs including a field-based cane toad surveillance and response team, major biological surveys, strengthened quarantine measures, public awareness and education campaigns such as a free cane toad phone app, a free-call cane toad hotline, cane toad drop off points and funding research programs to investigate opportunities for long-term control of cane toads and ways to minimise impacts on native species. Despite this massive effort, cane toads continue to move westward across the Kimberley and it is now clear that this movement cannot be stopped using any of the methods currently available.

The line of the cane toad invasion into Western Australia as at 2021.

Cane toads have no natural enemies and their spread is having a devastating impact on our native animal species and ecosystems.

Cane toads are toxic at all stages of their life cycle, as eggs, tadpoles, metamorphs, juveniles and adults, and their ingestion can kill native predators. Their toxin is strong enough to kill most native animals that eat frogs or frog eggs, including birds, other frogs, reptiles and mammals. They pose a risk to both native animals and household pets.

Adaptive
Cane toads are robust and can live in a wide variety of habitats. They thrive in urban and disturbed areas. They breed quickly which allows them to rapidly colonise and dominate an area.

Competitive
Cane toads compete with native species, for both food and habitats. They have a voracious appetite and eat a wide variety of foods, depleting the food source for other animals. Native frogs are particularly vulnerable to the threat of cane toads both as a food source for the toad and as a competitor for other food sources.

The cane toad is moving in a south-westerly direction and is currently found in Casino, Bungawalbin and Evans Head.

The Clarence Valley has played host to a disjunct population in Yamba for over 20 years, and we now have satellite populations in Brooms Head, Townsend, Maclean, Mororo, Woombah, Wooloweyah, Warregah Island, Micalo Island and Palmers Island.

The objectives of the CVCIA cane toad program are to:

We need your help to make a difference!!

The known locations of cane toads in Clarence Valley as at 2010. From Google Map picture.

In a nutshell, you can do a great deal. What we don’t want you to do is sit at home tut-tutting saying “somebody” should be doing something. Well, you are that somebody! Here are some ways you can help out:

So yes, you can make a difference!

The NSW Environment, Energy and Science website has some information on checking your load and using toad super traps, but organising regular pickups in your area and getting your friends involved is a great start.

So check out our website, learn some and then get involved! You can make a difference.

So how do you catch a toad and what do you do with it once you have it? Well here are the answers…

Well, you can either:

DANGER!! Cane toads have poison glands on the back of their heads – always handle toads with gloves on. Many use disposable gloves and change the gloves regularly during a collection night.

We have all seen footage of the kids heading off with their golf clubs to “control” some cane toads, but that is just not the right thing to do. Every animal deserves a humane death and if you are not doing that, it is animal cruelty. It also jeopardises the future of feral animal control when things are not done humanely as programs like ours can get shut down if people are not acting professionally and humanely.

So how do you kill a cane toad humanely? Well, there is always much discussion on this, but in NSW, the currently accepted method is to put the toad into a fridge for at least 4 hours (overnight good) and then into a freezer for at least 3 days (or risk them coming back to life).

You now have no excuse so go on, get out there and start picking up toads!!